Warrington has undergone a transformation in recent years and has seen the population increase by almost 20% with the addition of new areas to the town such as Chapelford. One of the biggest towns in the UK, Warrington has plenty to offer to residents. Buy to lets in Warrington typically yield over 5% return to investors and with the fantastic links to major cities, Warrington property is a fantastic investment.

Our Developments in Warrington

Why invest in property in Warrington?

Warrington is located between Liverpool and Manchester, close to our head office in Hindley. We've always looked to invest in all areas in the North West and Warrington stands out as a fantastic area of opportunity for any budding or seasoned investor. There has been a considered redevelopment of the town centre in recent years, with the High Street being transformed into a leading area for retail. Known for being a "gateway" town, Warrington has fantastic links to all major cities in the UK with well positioned train stations. Commuters live in Warrrington with both Manchester and Liverpool less than a 20 minute train journey away.

Below are some of our properties and planned developments in Warrington 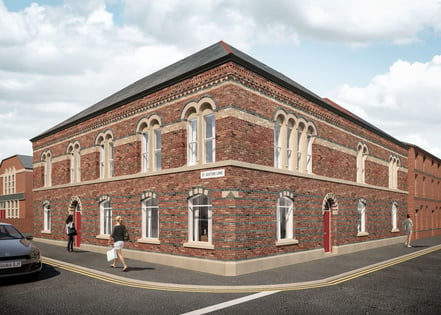 We've completed several properties in Warrington, focusing on high yield properties for our investors such as apartments and HMO's. St Austins is our most recent completed development, providing tenants with luxury apartments in the town centre, less than 5 minutes walk from both train stations and with access to local amenities as well as the new Market complex.

We are looking to continue developing property in Warrington with new opportunities arising all the time for both investors who wish to take advantage of an area that has historically performed well with rising property prices and those who wish to buy to live in Warrington.

Warrington is a fantastic investment opportunity - below are some reasons why buying property in Warrington could be a smart move.

As one of the largest towns in the UK and certainly in the North West, Warrington has exceptional transport links to other areas in the country. Situated in the middle of the M62, M6 and M56 - links to the North (Preston, Scotland), the South (Birmingham, London) and Wales (both North and South Wales) are all within a short journey.

Combine that with 2 train stations linking Liverpool and Manchester and Edinburgh and London and you really can get anywhere in the UK. Also an area with exceptional beauty, Warrington is home to Risley Moss,  a local nature reserve, Walton Gardens, historical gardens and grounds and Lymm Dam - a large water reserve.

There are a considerable number of suburbs around Warrington, all with prime property locations such as Stockton Heath, Grappenhall and Appleton.

Property prices in Warrington have traditionally increased over the years with an average price of a 3 bedroom semi-detached house of £208,395. Terraced properties are sold for around £154,188 and detached properties selling for approximately £355,996.

Property prices have increased by approximately 9% when compared with 2016 figures, showing strong growth and no sign of slowing down.

Warrington Town Centre has a large shopping complex called Golden Square. Redeveloped in the mid 2000's, the new development redesigned the bus station and brought a large number of high street shopping under one roof. Boasting a healthy market scene, the old market was set to be redeveloped throughout 2017 and will be officially opened in 2020, boasting a state-of-the-art market hall, cinema complex and a number of bars and restaurants.

As well as shopping, there is a thriving nightlife in Warrington with a number of popular bars still attracting massive amounts of customers throughout the week. As Warrington is a large town, there is a big student night on the town, attracting people from surrounding areas such as Newton Le Willows, Northwich and Runcorn/Widnes.

Home of Warrington Wolves, the Super League club often brings in a wealth of fans and spectators to the Halliwell Jones stadium, situated just outside the town centre, but walking distance from the train station, Local rivalries often make games at the rugby stadium an amazing affair.

Initially a Roman settlement, strategically placed on the River Mersey - Warrington has a rich history in industry, being known for it's wire, textiles and chemical industries during the industrial revolution. Known as a manufacturing town - Warrington has always held a good reputation for its people being down to earth and willing to put in hard graft to succeed.

Warrington also holds a place in the history of the UK having been home to Oliver Cromwell and his army during the English Civil War. Notable monuments include a grade II* listed building in Cromwell House and the Grade 1 Church St. Elphins in Golborne. There can be more information about Warrington's rich history in the Museum and Library situated on Bold Street.

Ikea opened it's first UK store in Warrington back in 1987, initially planned for near London - executives chose Warrington due to the excellent transport links and were directly involved in regeneration plans in the area.

Warrington is home to a large number of diverse jobs across multiple sectors. perhaps the areas largest employer is Lever Brothers who have a manufacturing and distribution centre near to the town centre. Other employers include Eddie Stobart, BT, and O2 with logistics centres and call centres throughout. There is also a strong education sector within Warrington, home to Priestley College, Warrington Collegiate and a Chester University campus.

To speak to a member of our team regarding any of our existing developments in Warrington or if you're thinking of investing then please do get in touch.